A few weeks ago, I put some fresh capital to work!

Unfortunately the amount of this fresh capital was not as large as it should have been, but that's because we spent some time in the city of London. It's a great place to be, although it's not very cheap.

We did the usual sightseeing and went to one of the most succesful musicals ever: Les Miserable.
A very exciting experience! We had a great time.

In the midst of all this, I'm in the process of buying my first apartment!
More about that soon, as it is not yet finalized.

Let's get back to business!

Wells Fargo is one of the biggest banks in the US. Their total assets have a value of $1.69 trillion dollars. They offer a wide variety of financial services like personal banking, insurances, mortgages, wealth management and investing services.

During the Great Recession the entire financial sector took a big hit and WFC was no exception. The stock went from $39 to $8 in a matter of months.

As we know now, they have managed to recover pretty well from that.


The impact of the recession is also shown in the graph below, which shows the dividend payouts of WFC from 2002 until now. 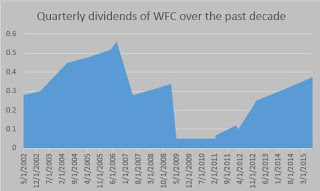 This graph leads to the following DGR numbers.

With an earnings per share of $4.11 and a very small payout ratio of 36.54%, there should be more than enough room for WFC to grow their business and their dividends to the $0.52 per quarter they once paid. The low forward P/E of 12.49 is just another metric of showing this potential.

I can definitely see why Warren Buffet has so many of shares of this great company.

What do you think of this purchase?

Why did I start this journey?

It has been a great journey so far!

Just 15 months ago, I did not know anything about DGI.
Of course I knew about stocks, but I thought the only way to make money on the market is to know which stocks will be at a higher price tomorrow than they are today. However, I did not find myself capable enough to find such stocks. As I have learned recently, this is not because I am stupid, but because nobody in the entire world knows.

Fortunately I came across DGI. This strategy enables you to make a profit without relying on rising stock prices, basically without doing anything. It opened my eyes and I really have to thank bloggers like Dividend Mantra, Captain Dividend, DivHut, DivGro and Roadmap to Retire, amongst many others for this insight!

Just knowing about the strategy was not enough reason for me to start the journey.
At the time I was very disappointed in all the major banks in The Netherlands. The average interest you would get at a standard savings account was 1.4% to 1.2%. With inflation taken into account, I was just losing money, instead of gaining some.

This was how it all started.
My primary goal was to beat the 1.25% interest rate I received in June 2014.

So, let's see what happened with the interest rate after June 2014.

Kaboom! The blue chip companies I invested in, paid me 3.38 times as much as the bank would have done. Amazing.. I would not have thought that this simple strategy could be this successful.

Keep at it and I'm sure you will beat your local bank as well!